Hercules Didn’t Wade in the Water

“A comedic work that breaks our hearts just a little”
– Victor C. Leroi, Pittsburgh in the Round 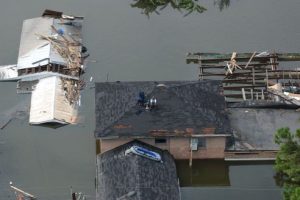 It is 2005. Two men cling for life on a rooftop, surrounded by murky water, festered with disease and the unknown. Two women are hundred of miles away, striving to see their dreams of life, love and the pursuit of happiness come to fruition. All of this set against the threat of one of America’s greatest disasters.

“Jamal works exceptionally well getting strong performances from his cast, with Sam Lothard and Lamar K. Cheston creating a rock-solid sense of friendship as Tupelo and Youngblood. Shaun Nicole McCarthy portrays Char as the warm heart of the play, and when given a chance to be vicious, Shanita Bivins and Corey Lankford, as Maxine and Eugene, are delightfully nasty.”
– Ted Hoover, City Paper

Reviews: Pittsburgh in the Round, Burgh Vivant, City Paper, Post-Gazette