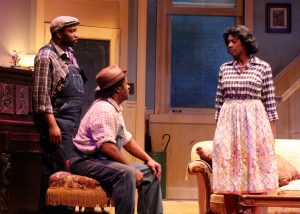 “[The audience’s] warmth and enthusiasm [was] unsurprising…. Such a reception was warranted by the caliber of this production.”
– Gerard Stanley Hornby, City Paper

August Wilson’s 1990 Pulitzer-winning drama is set in 1936 Pittsburgh’s Hill District. The Piano Lesson focuses on conflict between a brother and sister who differ on what to do with a family heirloom, a piano.  The brother, Boy Willie, is a sharecropper who wants to sell the piano to buy the land where his ancestors toiled as slaves. The sister, Berniece, remains emphatic about keeping the piano, which shows the carved faces of their ancestors during the days of their enslavement. Presented on the stage of the August Wilson Center.

Download the program for The Piano Lesson to read or print.