Theatre Festival in Black and White (2016) 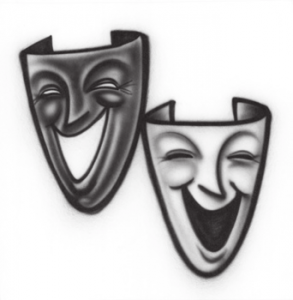 Our signature one-act theatre festival returned for its twelfth year with another selection of entertaining short plays. We scheduled it in conjunction with the Dollar Bank Three Rivers Arts Festival, so you could come downtown and catch both. It ran June 4-11, 2016.

All performances were FREE to the public!

No Winners, by Daphne S. Austin, directed by Christine Marie. Drama. The loss of a child to senseless gun violence affects both the family mourning the death and the family of the guilty party. Starring Shanita Bivins, Christian Carter, Shenita Williams.

Vows, by F.J. Hartland, directed by Stephanie Akers. Comedy. A young couple is given a glimpse into their future married life. Once they see what’s ahead, will they still take their vows? Starring Natashia Burton, Christine Marie, Jomo Ray.

Home Again, Home Again, by Nik Nemec, directed by Wali Jamal. Comedy. After his boyfriend dumps him and kicks him out, Teddy has nowhere to go but his grandmother’s home. Starring Hazel LeRoy, Nik Nemec, Noah Zamamiri. (Strong language)

Support for the Theatre Festival in Black and White was provided by: