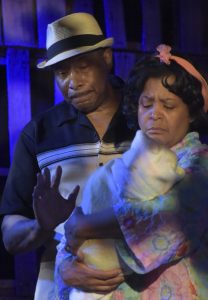 The production reconfirms Southers and Pittsburgh Playwrights Theatre Company as among the foremost interpreters of the work of Pittsburgh’s most famous playwright.

Set in the 1950s, Fences evokes the early rumblings of the civil rights movement. The central character is Troy Maxson, a middle-aged resident of Pittsburgh’s Hill District. The play follows Troy’s struggle to accept the generational changes that allowed his son to succeed in ways Troy never could.